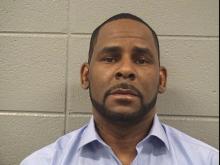 Allred claims this is not the same video that led to the indictment of Kelly for allegedly abusing four minors between 1998 and 2010.

According to Allred, her unnamed client discovered the video in a "box of old VHS tapes" and was "horrified" by what was on the tape.

Kelly's attorney Steve Greenberg (quote) "denies that he is on any tape with under-aged girls." He also questioned whether Allred's clients could be prosecuted for what they (quote) "believe is child pornography in their tape collection."